I spent the opening hours of this day watching the memorial for 41st U.S. president George H.W. Bush. I saw a nation celebrate a former leader but also aging children (of my generation) seeing off an elderly parent.

This is a common experience for those of us whose parents live long: we share their passage through decline to death even as we glimpse or enter our own “later years.” We begin to look back and it tangles with some new and perhaps urgent need to “come to terms with” these parents — who they were, who they’re becoming. (Or un-becoming.) 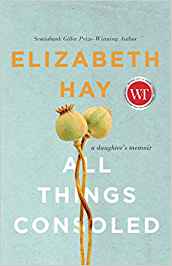 Just last night I finished one such story, wonderfully told by Elizabeth Hay in her award-winning All Things Consoled. I heard Hay at the Vancouver Writers’ Festival this fall and knew her book, whose “arc,” she said, “is mortality,” would resonate. The details, the personalities, are hers specifically and yet, reading it, so much belonged also to me, an oldest daughter who was nearest, thus point person and witness to the parents’ increasing frailty and dementia. Yes, and yes, to the sense of responsibility, longing, ambivalence, sweet moments, humour, and toll of a lengthy leaving that she describes.

The arc of mortality implicates not only parent and child but every relationship in the family. I chatted with Hay after her talk and since she’d mentioned siblings, related that my two sisters, knowing we yearned to live closer to our children after my husband retired but wouldn’t leave Winnipeg while Mom was alive, told me it was their turn now. I said that we relocated Mom to a nursing home in Saskatchewan, the sisters took the role of Nearest-to, we moved to B.C.

I was touched, then, at Hay’s inscription in my copy of her book: For Dora, who is lucky in her sisters…. Yes I am.

And I heartily recommend the book!

6 thoughts on “The arc of mortality”