I began this blog in December 2017. Our move from Winnipeg, Manitoba to Tsawwassen, B.C. had heightened in me the sense I was entering a new stage of life. My way to explore this was by writing about it. I wanted to embrace my identity as an Older while noticing its many aspects, from celebration to challenges.

Sixty-eight posts later, I feel it’s time to take a break. I haven’t been writing here as faithfully as I did at first.There seems less “new” in Old. I think I’m beginning to repeat myself. Maybe I’ve settled into the experience of it. It’s not that I’ve talked about every area of oldness that affects me, of course. Columns might have been written on hearing loss, for instance, which I was reminded of when my six-year-old granddaughter easily supplied a remark in a video I’d listened to several times without being able to “separate” the sounds enough to decipher. Or on leakages of various kinds. Or catching myself complaining about the lines on my neck. (I really don’t care, do I?) Or MAID, which I want to think about more deeply.

But for now, a break, and a big thank you to those who have followed my chronicles, perhaps added comments and stories. The blog will stay up; I may put in a note, or even resume, at some point. In the meanwhile, I invite you to my main site, Borrowing Bones, which I’ve maintained since 2009, where I share my writing life, what I’m reading, or whatever.

The sun has just risen and the sky is pink with happiness and hope. I wish you all a good measure of both, and a safe and blessed Christmas.

“Chronicles” assumes a report about birthdays. I celebrated mine last week. The weather here was a balmy 9 degrees so we had a pleasant walk along the Boundary Bay dyke (eagle spotting is one of my husband’s favourite activities) and greetings popped into my email box and phone and Facebook feed all day and there were phone calls with a son, daughter, sisters, my mother, a friend, and just the day before I’d received some good news from a publisher (which I’ll say more about later), so I was buoyant and grateful and contented and feeling very much loved. (Love has an agelessness about it that’s especially welcome on birthdays.) Later we enjoyed a delicious roast beef dinner and cake with our Tsawwassen children and grands at their house, followed by a lively game of Apples to Apples. A couple days later H. and I went out for a belated birthday dinner of our own and I had a dish of chicken livers which in addition to the conversation was simply perfect. The card drawn for me by a granddaughter demonstrates that 69 candles requires a rather large and multi-levelled cake, but I quite like the number, actually, with its multiple triads/trinities. And that was the birthday, happy and tucked in for another year. 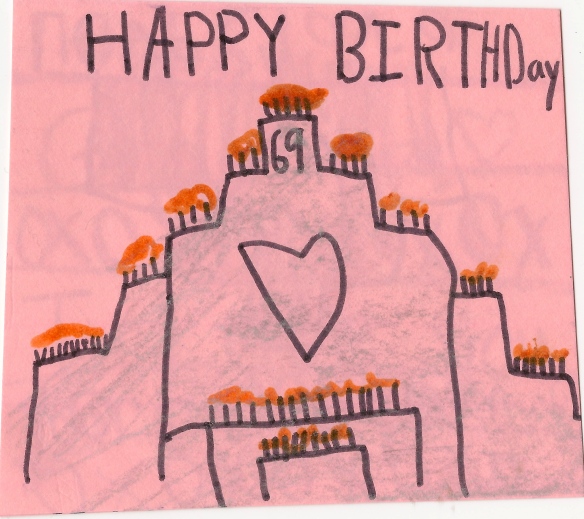 I’m noticing that memoir involves two kinds of investigation. One concerns “facts”: research in various sources for context as well as gathering memories. Two concerns meaning. It probes at memory with a present-day eye to patterns, to who I was then and how I was shaped.

For example, on the left, a photo from my father’s slide collection of the house (near Linden, Alberta) where I lived between four and eight, the only photo I have of it but a solid truth. It was the church parsonage, built into a hill, with a garage beneath, and I know from what I was told and from the evidence of church minutes that it was small and inadequate, especially for a large family (four, and then five, children there with two parents).

Since I’ve been trying to see better via sketching, I copied the house. As I looked closely in order to draw it I was delighted to spot the childhood wagon. And I was intrigued by the milk cans on the porch. The milk cans and signs of construction raised questions for which I have no answers. (I believe the house was eventually blue-grey.) 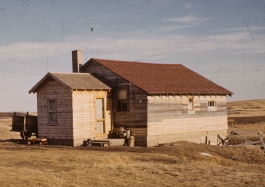 But, closing my eyes, remembering deep inside…. What was this place in my young life? What did it “feel like”? That house never seemed small, even if for lack of bedrooms I slept on the sofa. It felt cozy, happy, secure. It had music: huge reels pouring The Messiah into the air or the choir carolling outside at Christmas. It’s where Mom read us books and I got hooked on story. It set my default for beauty in the natural world: rolling prairie and sky. I see and represent that house (using watercolour paints) in simple lines, in joyful colour.

“What should I do with my life?” Mom, who’s 96 and frail, who has significant cognitive loss, asked this question of my brother Al three times when he recently visited her at her Saskatchewan nursing home.

I had to smile. How often I heard similar questions when we lived near one another in Winnipeg. “What do I do now? I need to plan for my future.” This at 92. I would smile then too and say something about not needing to do anything, you can rest now, you’ve done enough. In other words, I dismissed what she was asking instead of taking it seriously. 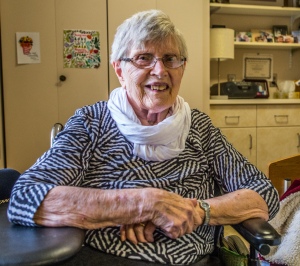 I was gently corrected about all this, however, that same year, by Gerhard Friesen, who’d worked for many years as a chaplain to seniors and was thus a good interpreter of them. Older people, he told me, often have unfinished business. Many women, he went on, have felt unfinished in their development or giftedness and when the mind gets weaker, this comes to the fore. It emerges as “what should I do?”

This surely fits my mother’s generation of women, but I submit that perhaps it’s true for all of us as we age. I often ask myself versions of it. I think it’s our sense while alive that we’re never quite finished. Simply being human involves poking about and moving forward from “what should I do with my life?” As Victor Frankl put it, it’s not life that answers to us but we who answer to life.

My brother’s response when Mom asked? “Say something nice to someone each day!” I think that’s as good as it gets. And, if you’re interested in how GF worked at this with Mom, please see the Addendum below. (Because I’m at my self-imposed limit of 300 words per post!)

The following is taken from my 2014 journal, set down as closely as I could recall afterwards. The story begins with Mom telling me that she’d talked with Victor Adrian (a Mennonite educator), though I knew she meant Gerhard Friesen, who led a weekly Bible study with some nursing home residents, and when I supplied his name, it was, oh yes, yes. I gathered they’d talked about her “purpose” and something about reading. She pointed at one of her theological books, a kind of overview of the Bible or doctrine by R.A. Torrey, I think it was. Later GF and I had a phone conversation about this and he filled in the gaps. She’d been pressing him with questions similar to the ones she’d been asking me: what to do now, what about her future? When he came to her room in response to her repeated entreaties, she immediately said, “I’d like to know where I am in my studies.” He had to think on his feet, he said, but this was a clue to ask about her education. High school: had she finished? Yes. College? Yes, she’d done some studies at Bible college and also graduated from teacher’s college. An “info chart” about her life on the wall of her room verified this information. He noticed she had books in the room. Or maybe she pointed them out, the culled favourites of those collected earlier. She loved to read. So GF encouraged — no, I would say, he blessed and instructed — her to read in her theological books. Torrey seems completely “old-fashioned” by now, at least to me, but he was an important figure in the education of my parents, and Gerhard knew that so he encouraged her to re-read it and see if it brought back what she learned at college. It would “refresh” her. The advice and interaction seemed to satisfy her.

GF and I talked about Mom having been a minister’s wife, beside but also behind him, as it were. He wondered if maybe she felt her gifts hadn’t been used enough. I can recall that we children sometimes remarked, in reference to some little “talk” Mom had given somewhere, that she was a better preacher than our father.

I’m still moved by the insight GF gave me that day, to affirm my mother’s gifts, to recognize the key “bent” of her being, her deep love of reading (yes, how proud she has always been that she’s a reader!), no matter the limitations of her latter years. I’m moved that he urged her to fill it up, even in her 90s. I hope, if it comes so far, someone does the same for me.

The average life expectancy of a North American woman is 81. Her life span, then, divides into roughly four quarters of 20 years each.

Which means, since I’m past 60 (69 now to be exact), I’m well into my fourth quarter. This blog chronicles my experiences of, and observations about, living my last stage.

My name is Dora Dueck and I’m a writer. Please see the About page to learn more about me and the motivation for this blog. I invite you to also visit my main site, about my writing and reading and other topics, at           www.doradueck.com.

How You can participate

I invite you to follow this blog below, or if you prefer not to receive email notices, please bookmark the site and stop by at your convenience!